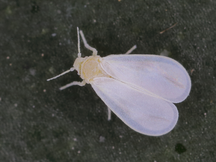 Greenhouse whitefly Trialeurodes vaporariorum are found predominantly in temperate regions but have a worldwide distribution. They are known to be vectors for hundreds of plant viruses [1,2], while also being resistant to a number of different insecticide groups. T. vaporariorum are primary insect pests for many agricultural and horticultural crops including fruits, vegetables and ornamental flowers. Adults are ~1.5 mm long but range 1-2 mm in length, white and are said to resemble tiny moths. The wings are a pale yellow, held relatively flat in relation to the leaf surface and are coated with a pure white waxy bloom giving them a 'dusted' appearance.

The Trialeurodes vaporariorum genome was sequenced by Genetron Health. The draft assembly was produced from sequencing data comprising 82 and 131-fold coverage respectively for long PacBio reads and Illumina shotgun reads. The final genome sequence of T. vaporariorum that had a total length of 787.4 Mb, and contained 397 scaffolds and 3,573 contigs with N50 lengths of 70 Mb and 500 kb, respectively.

Prior to the publication of the recently released genome sequence for T. vaporariorum in 2020[1], an initial genome sequence was released in 2019 [2]. This previously published genome had relatively low contiguity and scaffold N50. Ensembl Metazoa uses the most recent genome release[1] which was assembled using both short/long insert PacBio long reads and Hi-C chromatin interaction maps to generate a near chromosome-level assembly.

The annotation in Ensembl Metazoa was created from gene models obtained at WhiteflyDB[3] via GFF3 importation. Non-coding RNA genes were added with the Ensembl Genomes RNA gene annotation pipeline.